Siouxland Ag in the Classroom

Siouxland Ag in the Classroom 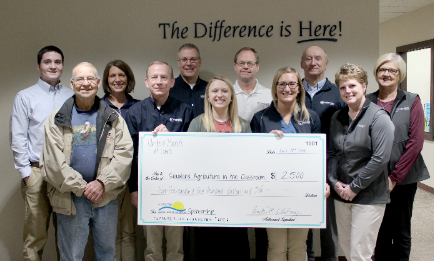 The following information is provided by SiouxlandAgriculture in the Classroom.

In rural Iowa, we are surrounded by agriculture and its impact on America's economy every day, yet many children in our region are still unsure of the origin of their food. It'snot uncommon for today's youth to believe chocolate milk is produced by brown cows—or even more surprising—the grocery store. This growing issue becomes more apparent as each day passes. Thus, Siouxland Agriculture in the Classroom was created.

A group of individuals who saw the need for increased agriculture education came together to create anon-profit organization to address this issue. We work to lessen the gap between producer and consumer that is so prominent in today's society. Students in the area school systems should have the opportunity to learn where their food comes from and interact with individuals involved directly with the agriculture industry. These youth are America's future buyers, voters and influencers. We need them to be knowledgeable of modern agriculture.

We have developed programs to implement agriculture into schools in a seven-county area and work to make agriculture a regular part of a teacher's curriculum.

Melissa Nelson is the Director for this organization and Heather Collins serves as Agriculture Education Specialist. Their passion for agriculture and agriculture education is obvious if you meet them. Their belief that the job isn’t done until every single child knows where their food comes from drives the organization’s success. In the three years since the organization was formed, over 40,000 individuals have been reached with our message. There is nowhere to go but up from here.